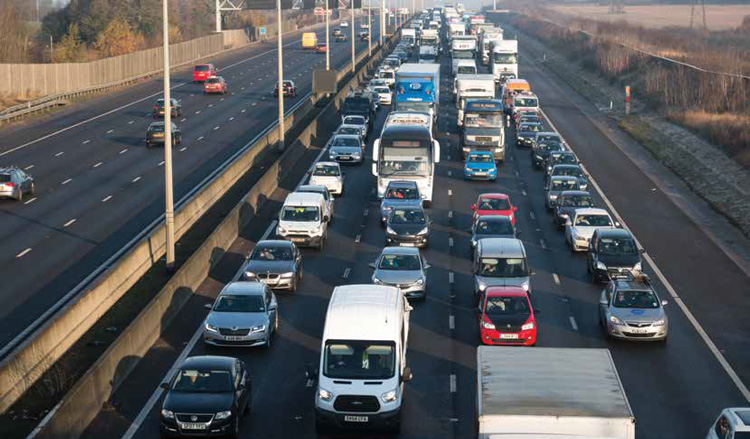 That’s the cost to the UK’s businesses of vehicles sitting in traffic jams. Trevor Gehlcken reports

If you think that traffic on the UK’s roads is getting worse and costing you money in lost business, then you aren’t wrong! There were more than 1.35 million traffic jams on the UK’s major roads in the past year, costing drivers an estimated £9 billion, new research from Inrix suggests.

The causes of the five worst queues ranged from fuel spills to broken down lorries. November 2016 was the worst month, with over 169,000 traffic jams on the UK’s major roads – 50% worse than average.

However, traffic jams across the month of April proved the most severe, with the research revealing they were 24% worse than average.

The year’s worst traffic jam occurred on August 4 on the M5 Northbound by Junction 10. Traffic tailed back 35 miles at the peak and the jam lasted 15 hours, resulting in an estimated cost of £2.4 million to road users.

Jams can be caused by all kinds of incidents but fuel spillages, emergency repairs and broken down lorries contributed to the biggest pileups this year

The cost of traffic jams is composed of the value of wasted time, fuel and unnecessary carbon emissions. Estimates were made based on assumptions about trip purpose and the fuel consumption of the average vehicle, with national averages used as a basis for these values.

Dr Graham Cookson, chief economist at Inrix, said: “While queuing is considered a national pastime for many Brits, nothing is more frustrating than sitting in traffic and Inrix Roadway Analytics shows it’s a costly activity. “Jams can be caused by all kinds of incidents but the Inrix Incident Platform shows that fuel spillages, emergency repairs and broken down lorries contributed to the biggest pile-ups.”

RAC roads policy spokesman Nick Lyes said: “We now have record numbers of vehicles and a road network that struggles to cope with the increased volume of traffic. This is very clearly demonstrated on a daily basis with congestion at key pinch-points around the country.

“Sadly, the fragility of the road network is exposed whenever there is a major incident on a motorway. The fall-out effect of motorists seeking alternative routes causes serious traffic jams in surrounding areas, often bringing gridlock to towns and cities as a result.

“While clearing the aftermath of a major motorway accident is understandably time-consuming, more needs to be done by all the agencies involved to speed up reopening and to improve diversion routes.”

RAC research has found that 56% of motorists believe congestion on the UK’s major roads, which are responsible for carrying two-thirds of all traffic, has increased. This is very worrying finding as motorways, high-speed dual carriageways and A-roads only make up 13% of the UK’s road network by length.

In addition, 61% of drivers surveyed said congestion and journey times on motorways had worsened in the last year.