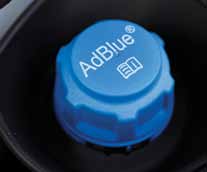 Fewer than a fifth of van drivers are aware of the emissions-reducing additive AdBlue, according to new research from Radius Payment Solutions.
The fuel card business investigated end-user knowledge of the additive which revealed, despite most new diesel vehicles having a tank, nine out of 10 respondents never used AdBlue.
The survey also found despite associated environmental and health impacts, more than a quarter had no idea about the benefits of the product.
AdBlue fluid treatment is injected into the exhaust gasses and can filter out more than 90% of harmful nitrogen oxide exhaust emissions into steam and nitrogen, resulting in less pollution.
Despite the tanks being filled every six months during servicing, the rate at which vans use AdBlue varies depending on how economically they are driven, engine size and total/average mileage.
This means drivers who are on the road for longer will need a higher understanding of AdBlue than the standard driver. Average consumption of AdBlue is around one litre every 600 miles but could reach up to a litre every 350 miles. The range between refills ranges from 3,000 and 12,000 miles, meaning some drivers will top up their AdBlue reservoir at least once between normal servicing.
Jonathan Haseler, regional director – UK at Radius Payment Solutions, said:
“For something that should be a regular maintenance check like filling oil and screen wash, the findings are surprising. Our cards help facilitate the purchase of AdBlue, making it easier for companies to adhere to emissions standards.”